After finishing yesterday’s post I finally found what I was looking for last night. Turns out I did indeed write a review of Star Wars Episode II after my initial viewing in May 2002, but I’ll spare you that tripe. However, as a comparison, here’s the portion of that post where 23 year-old me described our quest to see Episode II shortly after it happened. I may have gotten some of the details wrong in my retelling yesterday!

“As soon as my dad and I got to Las Vegas I started calling movie theaters to see which one had a digital projector. Since ‘Attack of the Clones’ was filmed entirely in digital format we wanted to see the movie the way George Lucas intended it to be viewed. The Orleans casino turned out to be the place to see digital Star Wars in Las Vegas. It was absolutely amazing. The difference between digital and film is akin to the difference between DVD and video. The clarity (i.e., the lack of lines and spots on the screen) made every detail of an expression or a costume noticeable. If a director really wants to draw a viewer into a movie then digital is the way to go. That, and having a great story to tell (i.e., Star Wars).”
5/23/02 webpage post 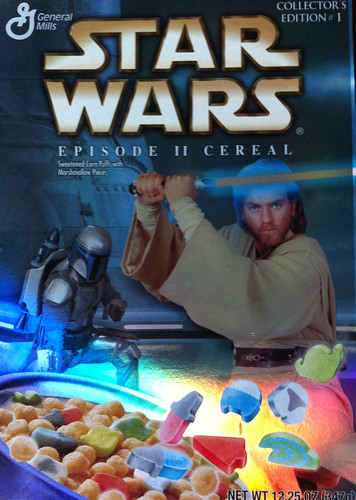