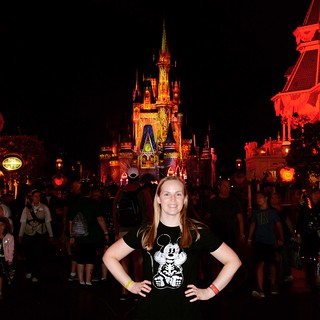 November means that it’s National Blog Posting Month (NaBloPoMo) once again. Luckily, all of my
Whole30(-ish) blogging in October was the perfect segue into NaBloPoMo 2017. I’m already in the habit of updating my webpage every day which is a plus, but November has traditionally been an extremely busy month for me. Case in point, I’m at Walt Disney World right now for the Wine & Dine Half Marathon Weekend which means that my normal routine has been thrown out the window. I’m sitting down to write this post in my hotel room before an early bedtime in order to be ready for the Fall Feast 5K at 5:30 AM tomorrow morning. It’s my first of three pre-dawn race mornings. Not the kind of thing most folks would sign up for on their vacations, but we runners are a little bit crazy! This morning I went to the race expo and picked up my race bibs and shirts for the three races. Actually, I slept in and barely rolled out of bed in time to get to the expo when it started. Last night I went to Mickey’s Not So Scary Halloween Party at Magic Kingdom and I stayed until after the park closed at midnight. Very uncharacteristic for me, but the party was amazing and totally worth the effort it took to get there after my flight landed yesterday. I’ll write a separate post about that later. I spent most of the afternoon at Hollywood Studios visiting a few rides that are no longer at Disneyland, like Tower of Terror and Muppet Vision 3D. So much fun. But now it’s time for me prepare for the 5K early tomorrow morning. I have big plans for the rest of this runcation and I need to be well-rested to fully enjoy it!