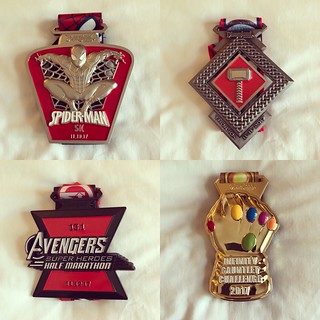 “I always joke that my entire paycheck goes directly to the Walt Disney Corporation. And with my Disneyland/Disney World annual pass, race registrations, and a couple of trips to Orlando per year it’s not that far from the truth.”
1/26/17 webpage post

Back in January, after the shock of getting my credit card bill from the holidays and a trip to Orlando, I resolved to be more frugal in 2017. About ten months have passed since then and I have to start this resolution revisit by confessing that I haven’t exactly succeeded in being more frugal this year with regards to Disney-related purchases. I’ve renewed my Premier Annual Pass which gives me unrestricted access to all Anaheim and Orlando Disney parks, gone to Disney World twice and run several races there, and participated in four multi-day race weekends at Disneyland. And all of that is on top of my usual visits to the Happiest Place on Earth that have nothing to do with running. These are expenses that, while technically frivolous, bring me a lot of joy. I get an immense sense of accomplishment out of conquering the Disney races (including the Avengers half marathon just this morning), plus I get to see the overwhelming excitement on my sweet goddaughter’s face when we watch Paint the Night or Fantasmic. I wouldn’t trade those experiences for any amount of money, but that doesn’t mean they were cheap! There’s some good news for 2018, though. Well, maybe not so much good news as really terrible news with an indirect upside.

On October 18th runDisney officially made an announcement that most of us in the running community had been expecting for a long time. All West Coast races were cancelled for 2018 and placed on an indefinite hiatus. This was not a huge surprise considering that back in March runDisney suddenly postponed registration for the Disneyland-based Star Wars Light Side Half Marathon Weekend shortly before it was supposed to open. (I was one of the lucky few who had already signed up for the 5K using a link sent out to previous participants so I was even more bewildered.) And then they gave us not one word of explanation for the next six months. After this extended radio silence we all knew that the race wasn’t going to happen, but we were still incredibly annoyed at being kept in the dark for so long. When the announcement was finally made last month, current and future construction at the Disneyland Resort was blamed for the race interruption. There’s no guarantee that is the true reason for the hiatus, but we have no idea when or if the race weekends will actually return. So the bad news is that my favorite races have disappeared for at least a year (the Avengers races this weekend were their swan song), but the good news is that I’m going to save a lot of money. Not just on registration costs, but also hotel reservations, food, and merchandise. My bank account is certainly going to thank me, but that doesn’t mean I’m happy about it. The bottom line is that I’ve failed miserably at this particular 2017 resolution, but things are looking up for 2018! Stay tuned for more next year.