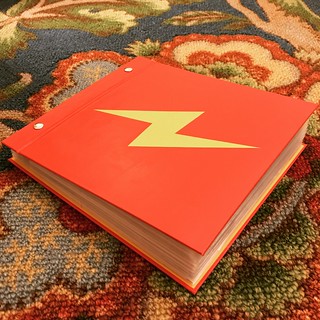 “As far as race bibs go, I have a huge stack of them in the same box as the old medals. The most recent ones get displayed on the front of my refrigerator, but after their tenure there is over they are filed away. My goal for 2017 is to put all of them (OK, maybe not the ones that I can’t even remember what race they’re from) in a scrapbook or album for future reference.”
1/4/17 webpage post

4/26/18:
It’s getting dangerously close to May, but I still haven’t documented any solid resolutions for the year. It seems silly to even consider the traditional New Year’s enterprise now, being nearly four months behind schedule, but at some point I’ll probably make a list anyway. However, in order to avoid getting too far ahead of myself, I figured I should probably follow up on my 2017 Resolution #1 before making any for 2018! Regarding 2017 resolution #1, I never posted this revisit (that I started writing a whole year ago!) because I had only accomplished half of my goal, but at this point I’ll take credit for that portion and the rest can wait.

4/25/17:
As April is drawing to a close I can happily announce that I’m finally making some real progress on my first New Year’s resolution. On March 12th I ordered a scrapbook for my race bibs from an Etsy shop that makes them specifically for this purpose. Then last week I finished putting my first 75 bibs in it. They range from April 2014 to December 2016. I admit that some of the bibs from that backlog got tossed because they were so generic that I either couldn’t remember which race they were from, or they weren’t memorable enough to keep. I’m really happy with how the scrapbook turned out. It’s a fun memento that reminds me of all my achievements and doesn’t take up space. But funny enough, it’s already almost completely full! I’ll need to order a second one for future race bibs.