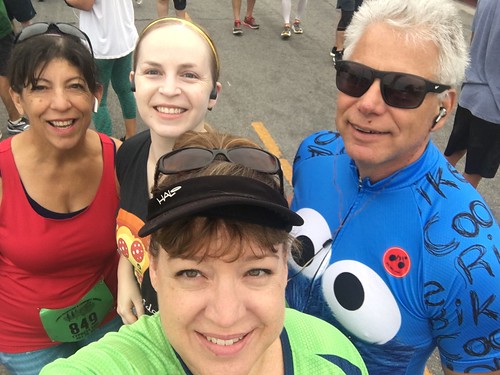 “Some days getting out of bed and changing out of my pajamas is about all I’m able to do. This is not beneficial to my mental health, but I am trying to cut myself some slack and let go of the guilt of resting as much as I need to.”
6/8/webpage post

After the last couple of posts about my health issues it probably won’t surprise you when I say that I’ve taken a break from the 6-week fat loss challenge. At some point last week I decided that being so strict with my food choices and having to post pictures of every meal and snack was more than I can handle right now. I’m exhausted and stressed all the time and I realized that I need to give myself a break in certain areas. There’s no use making myself crazy over something that’s not absolutely essential. Instead I’m going to focus on getting healthy and back to my normal, more energetic self. That doesn’t mean I’ve started hitting the Del Taco drive-thru on a regular basis again, though. I am endeavoring to stick to my new, healthier eating habits that I’ve been establishing over the last five weeks, with a small change here and there to make it more manageable. I did go to McDonald’s one day last week, but that was my weekly cheat meal. I’ve made enough progress (albeit minor) recently that I don’t want to revert back to my unhealthy ways and end up right back where I started. That would only add to my stress and make me feel terrible about myself again. Not worth it!

So for now, instead of worrying over the things I’m not doing, I’m trying to focus on some recent successes. They may be small, but they are most certainly steps in the right direction. Last week at boot camp one of our strength exercises was inverted rows, which have never been easy for me in the past. However, this time I was able to complete half of each set in a fully inverted position, with my back completely parallel to the floor. How’s that for progress! I was surprised, but super proud of myself. Obviously going to the gym three days a week consistently for the past six months has been paying off. I did have to take a step back, making the rows easier, in order to finish the set, but I’m OK with that. Also, I find myself reaching for heavier weights at the gym. In the same class as the inverted rows I was using an 88 lb kettlebell for deadlifts. I know that’s not a lot for most people, but it’s much more weight than I used to be able to comfortably deadlift. And I appreciate deadlifts because they have been strengthening my back, which makes just about every other exercise safer and easier. At a boot camp class later that week we did farmer carries (basically just walking across the room, slowly, with heavy weights in each hand) and I was able to hold a 53 lb kettlebell in each hand. It felt like my arms were about to pop out of their sockets, but I made it all the way across the gym floor and back! That’s a huge step up for me considering what I used to be capable of. I am certainly reaching for heavier weights almost every time I go to boot camp. I never thought I’d be able to use 20 lb dumbbells for chest presses, but I have done it more than once now, and I think I might actually try 25 lb weights next time! My running is also improving, albeit very gradually. In the spring I struggled to complete a 10-mile run (a distance that would have been easy for me at any point last year), but a few weeks ago I finished it with much less trouble. (And this was with the weather working against me. Summer in Los Angeles has been really miserable.) I have given up the idea of running a marathon this fall, mostly because I don’t want to train in the heat, but I have plenty of half marathons on my calendar to prepare for. My next one is in about three weeks. Yikes! While getting ready for a 10K last Sunday I had to tighten my hydration belt because my body shape has changed enough that it was too loose on my waist and hips. That certainly felt good! I don’t think I’ve lost much weight during this fat-loss challenge, but I am definitely seeing results in other areas. My final weigh-in is on Monday morning so I’ll find out the final verdict soon enough. I may not have lost the 20 lbs I wanted to, but I think I’m on the right path.